ICYMI: Ed Gillespie: “Leadership is not just responding and reacting to problems, it’s getting ahead of them and preventing them”

RICHMOND, VA – This morning, 2017 Republican gubernatorial nominee Ed Gillespie joined Brian Kilmeade on Fox & Friends to discuss his vision for a safer, stronger Virginia. Gillespie talked about the importance of combatting MS-13, which, as The Washington Post has noted, is going through a resurgence in the Virginia. 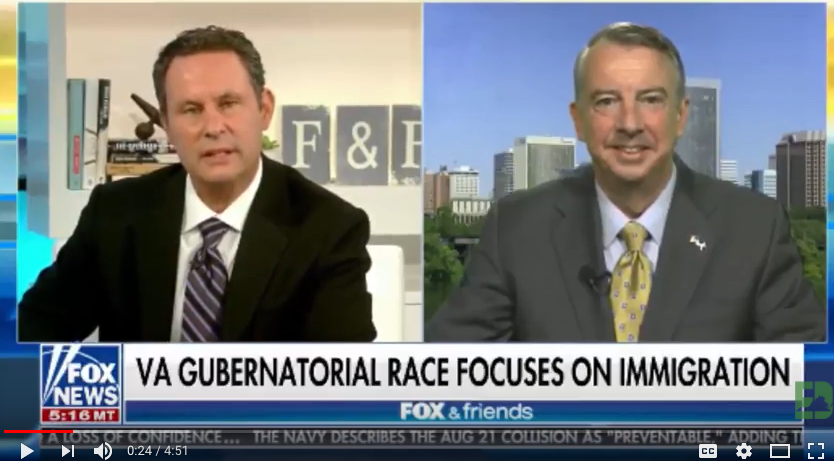 KILMEADE: The Virginia race for Governor is putting illegal immigration in the spotlight. The closely watched swing-state contest is a possible referendum on President Trump’s first year in office. Joining us right now is GOP nominee for governor, who almost was a Senator, Ed Gillespie, who was a National Security Advisor for President Bush, former RNC Chair. Big resume, why do you want to be governor, Ed? This is going to be anything but easy.

GILLESPIE: Well, I love Virginia, Brian, and we’re in trouble here. The fact is, we’ve had six straight years where our economic growth rate has been below the national GDP rate. We used to always leading it, and now we’re lagging it. Growth last year in Virginia was 0.6%, and we were 39th out of 50 states, and in wage growth, we were 44th out of 50 states. I know Virginia can be number one in the country in job creation and wage growth with the right policies, but we don’t have those policies right now, and we’re not going to unless I get elected governor.

KILMEADE: For the longest time, if you are against illegal immigration, you were put in the category of being anti-Hispanic. How have you separated yourself from the normal mantra?

GILLESPIE: Well, I’m the son of an immigrant, and I know people that come here legally contribute to our economy and to our country and become patriotic Americans, and we’re a welcoming Commonwealth here. But the fact is, when someone commits a violent crime – murder or other crime – and they’re here illegally, we need to cooperate with federal authorities and comply with the federal immigration laws, and those people need to be deported. I heard the clip that you ran, and I was actually quoting a Hispanic faith leader in Northern Virginia, where MS-13 has committed, in what’s been publicly reported, eight murders since November in Northern Virginia alone. And he was the one who was saying, you know, it’s our communities that are attacked by MS-13. We want them gone, and I was quoting him. The point I made to my opponent, the Lieutenant Governor who voted against a ban on sanctuary cities and in the debate would not say that he would ban them even if they were established here in the Commonwealth, I want to prevent them from ever being established. He says, well we don’t have any, but he made clear the other night that he won’t ban them even if they are, he wouldn’t say that he would do that. And I was quoting this gentleman, and he was saying these are in our communities, and I said to him, you know, Ralph, it’s not young women from your neighborhood or mine who are being forced into human trafficking by MS-13. We have got to step up and make Virginia safer, and I will.

KILMEADE: Right, MS-13, for the most part, they come over as unaccompanied minors. They get put with a sponsor family, and then for the most part, a lot of times, that family has loose reins, and they go to work – terrorizing high schools, or terrorizing the community. That’s what we witness on Long Island, and it looks like you have the same problem in Virginia. President Trump just tweeted this out on October 5th of last week – he said Ralph Northam, your opponent, who is running for Governor of Virginia, is fighting for the violent MS-13 killer gangs and sanctuary cities. Vote Ed Gillespie! That’s really why you want to do it. Because guess what communities get hurt most? Working class Hispanic communities are terrorized, first and foremost by these MS-13 illegals.

GILLESPIE: Well, and that was the point I was making about this Hispanic faith leader in Northern Virginia, who has a big community, and he was saying look, you know, these MS-13 gang members they are completely – they don’t represent at all what, you know, Hispanic values are, and I know that to be true. I have a lot of support among Virginians of Hispanic descent, and there’s no doubt about that. This is a very important issue, because if you’re not able to cooperate with federal authorities, you allow for sanctuary cities to be established in your state. We’ve seen states where that’s been done – it has not made people safer. I believe leadership is not just responding and reacting to problems, it’s getting ahead of them and preventing them, and that’s why I would support a law here in Virginia that says that no city or county shall be able to defy federal authorities when it comes to complying with immigration laws. My opponent voted against a bill like that, and he says, well it’s because we don’t have any of those, but then when I asked him in the debate what if a couple of cities became sanctuary cities? In that instance, would you retroactively ban them? And even then, he wouldn’t say that he would, and so it’s clear he’s just against a ban on sanctuary cities and is in favor of allowing them in the Commonwealth of Virginia. That’s consistent with the vote he cast on the floor of our State Senate.

KILMEADE: Ed Gillespie, who was almost the next Senator from Virginia. They needed extra days in a recount to decide that he actually did not have enough votes. This time he wants to make sure. Ed Gillespie, best of luck to be the next governor of Virginia. Looks like it’s going to be a tight race.

GILLESPIE: It’s going to be close – we’re gonna win it. I feel it everywhere I go. Thank you, Brian. 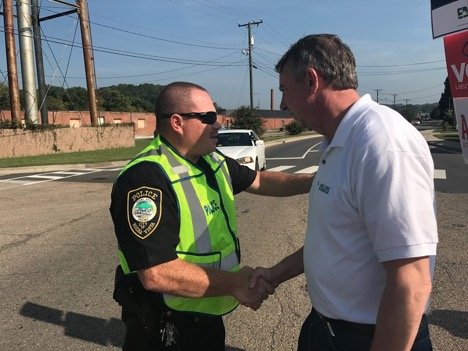 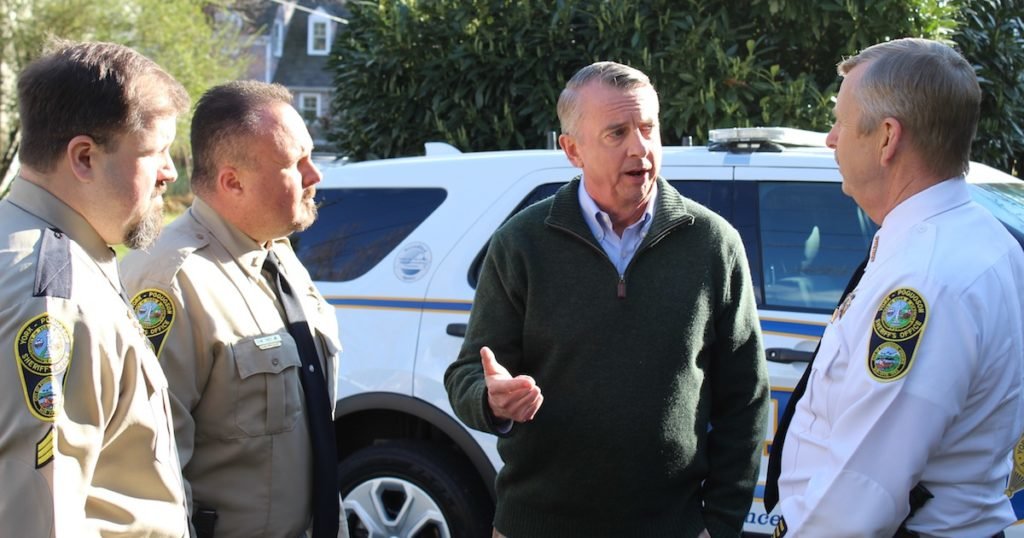