With concerns about gang violence growing in Virginia, 2017 Republican gubernatorial nominee Ed Gillespie’s campaign today released its new television ad, “Safer Communities.” The ad highlights Democratic gubernatorial nominee Lieutenant Governor Ralph Northam’s vote against banning the establishment of sanctuary cities in Virginia and the increasing threat posed by MS-13, which The Washington Post has described as undergoing a “resurgence” in the region.

“Ralph Northam voted against banning the establishment of sanctuary cities in Virginia, and he even bragged about casting the tie-breaking vote. Ralph Northam’s policy in favor of sanctuary cities in our Commonwealth will not make Virginians safer; it’s that simple, ” said campaign manager Chris Leavitt. “The first job of a governor is to ensure public safety; keeping communities, schools, businesses and public gathering places safe. As governor, Ed will ensure that sanctuary cities that are a safe haven for violent criminals here illegally are never allowed in the Commonwealth, and he will work to eradicate violent gangs like MS-13.” 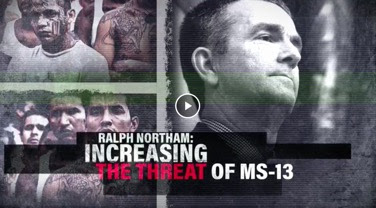 Anchor 2: The dangerous street gang MS-13 are responsible for the recent murder in Bedford County.

Anchor 3: Those crimes have been increasing around our region.

Narrator: MS-13 is a menace, yet Ralph Northam voted in favor of sanctuary cities that let dangerous illegal immigrants back on the street, increasing the threat of MS-13. Ralph Northam’s policies are dangerous.

Ed Gillespie: I’m Ed Gillespie, candidate for governor, and I sponsored this ad for a safer, stronger Virginia.

The Washington Post recently noted, “MS-13 has been going through a resurgence in the D.C. area in recent months. It has been tied to killings in Montgomery, Fairfax and Prince William counties and a surge in other crimes” (The Washington Post, 8/14/17). The Virginian Pilot Editorial Board wrote, “For everything Norfolk can celebrate today — all of the progress and the revitalization, the new destinations for tourists and the new business ventures — the violence in recent months threatens it all, and the city must make addressing it priority one” (The Virginian Pilot, 8/18/17).

In July, Gillespie released Job One: Keeping Virginia Safe. A key focus of Gillespie’s plan is gang prevention and eradication, but it is impossible to do so without discussing MS-13 and it’s impact in Virginia. A gang like MS-13 preys mostly on our illegal, legal and first-generation immigrant community. While gang-related violence continues to impact the Commonwealth, some localities seek to establish sanctuary cities, creating potential safe harbors for these gangs by limiting the amount of information local governments can provide to federal immigration law enforcement officials. As governor, Ed will sign legislation to make sure every city, county and town follows the law so there are no sanctuary cities in Virginia.