During last night’s final gubernatorial debate, 2017 Republican gubernatorial nominee Ed Gillespie called on Lieutenant Governor Ralph Northam to reschedule the meeting with Virginia Sheriffs’ Association that was cancelled because a majority of sheriffs endorsed Gillespie in the governor’s race. Lieutenant Governor Northam refused to break with his ally Governor Terry McAuliffe and call for the meeting to be rescheduled. 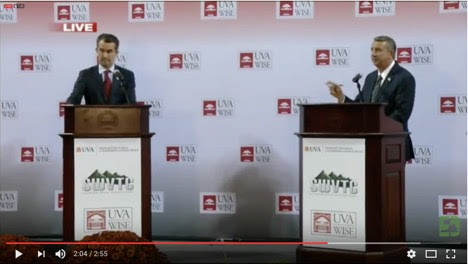 GILLESPIE: Ralph, you heard me mention the meeting that the governor cancelled with the Virginia Sheriffs’ and I was truly disappointed by that. They are a non-partisan organization They are on the front lines of trying to protect our safety of our commonwealth. I am proud to be endorsed by a majority of our sheriffs, including Ronnie Oakes, who I think is here this evening. But they should not be punished as an organization trying to stand up for the deputies and to make sure that we have proper compensation. They are on the front lines of many of the problems we have talked about here tonight, the opioid, and heroin and mental health epidemic. And I would like to ask you tonight if you will join me in having Governor McAuliffe, I’ll urge him but you can obviously get him to do it, to reschedule that meeting and to do that before November 7th, and listen to those sheriffs and find out what their needs are and what they are looking for in their annual meeting that they have scheduled on an annual basis, a routine meeting where they talk about their budget. Would you do that?

NORTHAM: Well I’m glad you asked the question, Ed, because I was going to respond to that earlier, but Paul wouldn’t allow the time, which I certainly understand. But I had absolutely nothing to do with the cancellation of that meeting. And I want to just let people out there know, I grew up on the Eastern Shore, my brother is an attorney, my father and grandfather both judges, I have always had a tremendous respect for law enforcement. I have always had great relationships with our sheriffs and deputies, with our state police, with our local law enforcement. And in 2011, Ed – I don’t know if you knew this because I realize you were up in Washington lobbying at that time – but I actually won the award for legislator of the year from the Virginia Sheriffs’ Department. And I was very proud of that. And that was because, as you might know, there are 140 legislators, I won the award, Ed, in 2011. So I have always been very supportive our sheriffs and deputies, I will continue to be. I have fought for pay raises over the years, and as I have said a couple of times tonight, a $1.4 billion hole in our budget is not a good way to support local law enforcement, sheriffs and our Virginia state police.

GILLESPIE: For whatever it’s worth Ralph, for the past – more than a decade have had a business in Old Town, Alexandria, and I left the firm that you are talking about more than a decade ago. But the fact is, you just made clear that law enforcement is not a priority for you. You’re not going to urge the governor to have that meeting. I will do it right now. Governor McAuliffe, please reschedule that meeting with the Virginia Sheriffs’ Association. Listen to their needs, find out what they need in terms of their budgets to meet the challenges that we face here in opioid, and heroin epidemic, and mental health as well. That is a priority for me and it is one of the reasons I’m so proud to have a majority of the sheriffs endorsing me in the Commonwealth of Virginia as well as the Police Benevolent Association and the Fraternal Order of Police because I have policies that will make Virginia safer, and I will have their back as our governor. And I’m proud to have their endorsement, I wish the governor wouldn’t engage in politics when it comes to people who are on the front lines of keeping us safe in our communities every day.

“The director of the Virginia Sheriffs’ Association has accused Gov. Terry McAuliffe of canceling a budget meeting in retaliation against sheriffs who have endorsed Republican Ed Gillespie for governor.
…
With polls showing a close race between Gillespie and Democratic Lt. Gov. Ralph Northam, who is running largely on McAuliffe’s legacy, the dustup with the VSA is a sign McAuliffe may be growing frustrated by perceived allies throwing their support to Gillespie. On Thursday morning, the Gillespie campaign announced that Middlesex County Sheriff David Bushey had switched his endorsement from Northam to Gillespie.
McAuliffe’s office did not dispute Jones’ claim that the meeting was canceled due to political feuding…” (Richmond Times-Dispatch, 9/29/17)