ICYMI: ED GILLESPIE: “I truly believe we are going to win this race.”

2017 Republican nominee Ed Gillespie joined Fox News’ Dana Perino to discuss the critical choice Virginians are facing this November. Gillespie highlighted his plan to make healthcare more affordable and accessible in the Commonwealth and his support for Virginia’s Right to Work laws. A video and transcript of the interview are provided below. 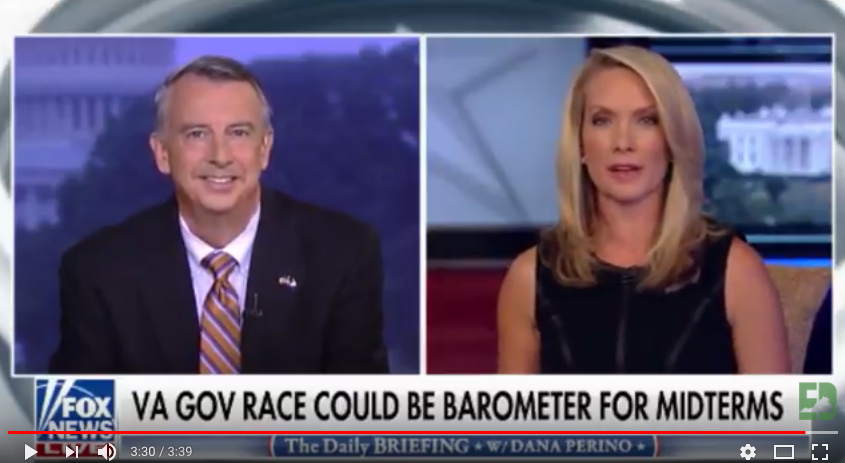 PERINO: Joining me now is Ed Gillespie, Republican candidate for governor of Virginia. And this is the only race that people are really paying attention to. There is one in New Jersey too but I think that one is over. Yours is a little bit closer, Ed, there in Virginia. How important is healthcare and is what the President announced today something that your voters are paying attention to?

GILLESPIE: It’s a very big issue here, Dana. And the fact is, one of the things that’s clear to me is in Virginia we can’t count on Washington, D.C. to solve our problems, we have got to have our own solutions here. And I’ve put forward a plan, ‘Health in Our Commonwealth,’ it’s one of my 19 detailed policy proposals to address the challenges we face here in Virginia, to make healthcare more accessible and more affordable. I’m focused on the state policies. My opponent doesn’t have a plan to help do this. What we need to do is to enhance more insurance competition in Virginia, and I’ve put forward to allow us to have competition across state lines whether the federal government acts or not, to make sure that we are bending the cost curve, which is what we were told would happen under the Affordable Care Act but we saw out of pocket expenses increase by – Also, giving us the freedom to innovate in our Medicaid program here in Virginia. What we need in Virginia is different from what people in Illinois, or California, or New York, or Florida, or Texas need. And we can be a leader in this regard if we can work with the federal government to have that opportunity. And I would also like to, through my policies, which they would, increase greater competition in the provider market as well and all those things would help bring down costs.

PERINO: So we’ve got about three weeks until November 7th, which the day of the election. The Washington Post has had Northam up over you for quite a while, in their latest poll 53 – 40 percent. But then if you look at the Real Clear Politics average, it’s much closer with Northam at 49 and you at almost 43. I have a question about national politics and how this might be affecting you, because clearly people are looking at how President Trump will affect the election, either hurting or helping you, but I’m wondering about the Democrats because there is certainly civil war within the Democratic party as well, and there’s a lot of progressive liberals that want a different Democratic party, and Ralph Northam as I understand it as a Democrat has actually been pretty moderate, so has that hurt him in this election?

GILLESPIE: Well, he at one time was, but he has moved very far to the left in the Democratic primary contest that he had. In fact he’s the first gubernatorial candidate that I’ve ever seen in either party in Virginia, who’s not running in strong support of our Right to Work laws here, and in fact at one point he said we can’t overturn them because there’s a Republican General Assembly, but today he said we may get a Democratic General Assembly in which case he’d be able to. That would be a disaster for us. We just saw Kentucky become a Right to Work state on our border. For us to go the opposite direction and become a compulsory union state would be wrong, but like I said, he’s the first candidate for governor who is not standing strong for our right to work laws. He wants to impose carbon limits like President Obama had a Clean Power Plan that Trump repealed in Virginia. He wants to impose one on a state level. So he’s moved very far to the left.

GILLESPIE: Well exactly and moved very far left. I would just say about the polls, by the way, The Washington Post has been wrong so many times. These public polls are not designed to gauge the outcome of an election. They are designed to affect the outcome of an election. We’re in a dead heat race here, and I feel momentum everywhere I go. I truly believe we are going to win this race, and I know we have to for the future of the Commonwealth I love.

PERINO: I think I know of a President who might agree with you on the polls.  Alright Ed Gillespie, candidate for governor of Virginia. That election in three weeks.