On a Monday afternoon press conference call, 2017 Republican gubernatorial nominee Ed Gillespie was joined by Delegate Greg Habeeb and Loudoun County Commonwealth’s Attorney Jim Plowman to discuss important policy differences with the Democratic nominee Lt. Governor Ralph Northam on restoration of rights, which, as changed by the Administration, currently makes it far easier for violent felons to begin the process to own a firearm, and lacks important safeguards to ensure public safety. As The Washington Post reported at the time, “In Virginia, felon voting rights mean simpler path to gun ownership,” and cited, “Gov. Terry McAuliffe’s order last month restoring the voting rights of 206,000 felons had an unintended consequence: It’s now easier for those ex-offenders to regain the right to own guns.” Among those who have had their rights restored under the Northam policy are dangerous repeat offenders. The policy does not take into account the nature of the crime committed, nor whether a returned citizen is living an honest life or unreformed and unrepentant.

In his campaign for governor, Northam has accepted credit for and adopted the flawed policy on restoration of rights, recently calling it “one of our greatest feats,” and confirming that he would “absolutely” continue the current policy.

Gillespie has spoken out about the the Administration’s restoration of rights policy, stating in April of 2016, “I believe in redemption and reconciliation and that a review of restoration of rights for non-violent felons who’ve paid their debt to society deserves debate, but this sweeping action benefiting convicted rapists, murderers and child molesters is a reckless abuse of executive power” (Richmond Times-Dispatch, 4/22/16). Last month, Gillespie released a criminal justice reform plan that included his thoughtful approach to the restoration of rights.

Speaking about the policy differences today, Gillespie said, “Ralph Northam’s policy on restoration of rights procedures brings to bear irresponsible governing that put at risk the safety of Virginia’s communities by making it easier for violent felons to own a gun. Our criminal justice system should be just, fair and redeeming and that includes advancing restoration of rights once a felon has paid his debt to society, including restitution to victims. We cannot move forward in fairness to anyone involved – victims or felons – without a more permanent solution. In order to provide consistency and fairness, we must provide greater stability to the process to avoid swings from one administration to another. As governor, I will adopt the McDonnell Administration’s accelerated process of restoring rights for those who have stayed out of trouble, but not for the unreformed and unrepentant violent felon who poses a danger to Virginia families. I will also ask Governor Doug Wilder and Governor Bob McDonnell to examine our current policies with the goal of putting forward legislation for consideration by the General Assembly.”

“The McAuliffe-Northam administration overstepped statutory and constitutional authority with its executive action. Democrat and Republican Governors dating back more than 30 years have researched this issue and all have concluded that they do not have the sweeping executive authority,” said Policy Leadership Team Co-Chair Senator Mark Obenshain. “As governor, Ed will respect victims of crime and the Constitution. That much is clear in his policy, and I believe he has put forward the right balance.”

“The Lieutenant Governor’s policy is dangerous for Virginia families. By supporting automatic restoration of rights for violent criminals, he supports easing the path to gun ownership,” said Delegate Greg Habeeb. “We can and should aggressively restore the rights to those who committed a crime, paid their time and are working hard to improve their lives. We should not treat the average non-violent offender the same as someone who sexually abused a child, or shot someone. The fact is if someone poses an ongoing threat to the public safety, we should work to ensure they do not have access to a firearm. That is a consensus position in Virginia. Ed agrees. Ralph does not.”

Policy Leadership Team Co-Chair Speaker-designee Kirk Cox said, “The McAuliffe-Northam Administration was reckless and dangerous when they unconstitutionally restored the rights of violent criminals and sex offenders. Ed Gillespie believes in reconciliation and redemption for those who earn it, but not for unrepentant violent felons who pose a danger to Virginia families. This is just another clear example of how, as Governor, Ed Gillespie will keep all Virginians safe.”

“Lieutenant Governor Northam has made clear he will continue the automatic restoration of rights for even the most violent felons – ignoring what is best for Virginia families,” said Loudoun Commonwealth’s Attorney Jim Plowman. “We can be a forgiving society that also recognizes that the end of one’s sentence is not the end of behavior that should preclude gun ownership or jury membership.”

“Lieutenant Governor Northam’s policy makes it easier for dangerous felons to get their gun rights,” added Rockingham County Commonwealth’s Attorney Marsha Garst. “The individual review for violent felons is critical for Commonwealth’s Attorneys to effectively monitor gun restoration requests at the Circuit Court level. The McAuliffe-Northam policy is a major departure from responsible policy to aggressively restore the rights of our fellow Virginians. We need Ed Gillespie’s vision and sense of fairness to do this the right way.”

“I know Ed Gillespie.  The foundation of his faith is rooted in love. Love for our fellowman teaches us to forgive not seven times, but seventy-seven times,” said Elroy Sailor.  “Ed believes nonviolent ex-offenders, who have served their punishment and now work to make the Commonwealth stronger, should be given a second chance.  The restoration of rights debate often includes a tension between ex-offenders who have disappointed us and offenders who threatened our safety.  Ed supports an immediate path forward for those who disappoint and a measured thoughtful process for those who have threatened our safety. Ed is committed to striking the right balance for forgiveness and restoration while creating the proper safeguards that benefit Virginians. I made choices that resulted in disappointment, and Ed has discussed these issues with many Virginians like me. We believe and appreciate Ed’s faith-led approach will keep Virginians safe while restoring opportunity, value and civic participation back to those seeking a second chance.”

Lieutenant Governor Northam has repeatedly claimed credit for the Administration’s policy to restore the rights of violent felons who have completed their sentences: 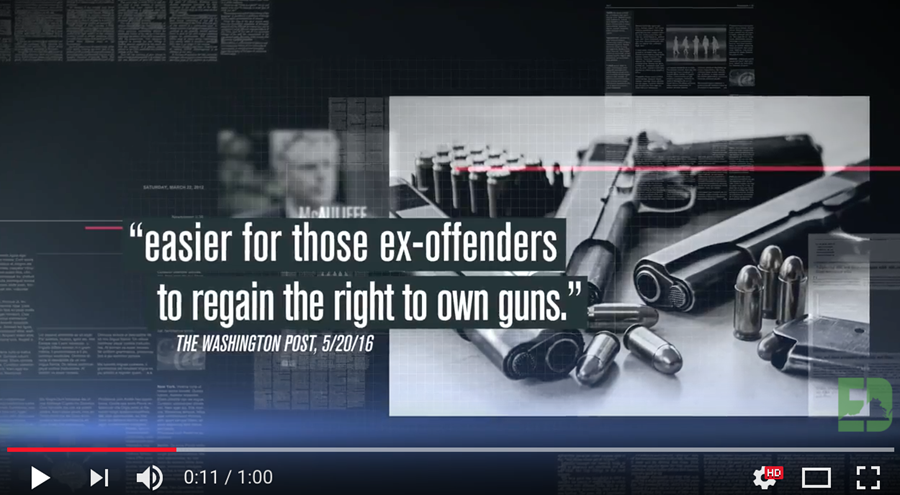 NARRATOR: Last year, Terry McAuliffe and Ralph Northam instituted the automatic restoration of rights for violent felons and sex offenders, making it easier for them to obtain firearms and allowing them to serve on juries. One of these felons, John Bowen, had his rights restored two months after being found with one of the largest child pornography collections in Virginia’s history. Forty-three prosecutors, Republicans, Democrats and Independents opposed Ralph Northam’s reckless policy. Now, Virginia law enforcement has endorsed Ed Gillespie for governor.

ED GILLESPIE: Virginians who have paid their debt to society and are living an honest life should have their rights restored. But Ralph Northam’s policy of automatic restoration of rights for unrepentant, unreformed, violent criminals is wrong. As governor, I’ll be both compassionate and protecting of Virginia families. I’m Ed Gillespie, candidate for governor, and I sponsored this ad.