2017 Republican gubernatorial nominee Ed Gillespie’s campaign today announced it will launch a new television ad, “Out of Bounds.” The ad, which will air in media markets across Virginia, comes a day after the Latino Victory Fund revealed a $62,000 in-kind donation to the Northam campaign for “media,” showing apparent coordination in the making of a television spot that has been called “the worst in political history” and “the most despicable ad I’ve ever seen.”

Speaking about the ad, campaign manager Chris Leavitt said, “Ed is putting forward policies to make life better for ALL Virginians, and over the course of the campaign he has highlighted the policy differences between himself and his opponent on issues facing the Commonwealth. Virginians respect and appreciate civil discourse, but the Latino Victory Fund’s ad was far out of bounds of the civility Virginians expect and deserve. In these closing days, as we saw last night when State Senator Barbara Favola called all Republicans ‘evil’, it unfortunately appears Democrats will continue to express their utter disdain for anyone who simply disagrees with them on any policy matter. It’s incredibly sad that they have sunk to this level. In contrast, Ed will continue to share his positive vision with all Virginians, and work to bring Virginians together to make our Commonwealth safer and stronger.” 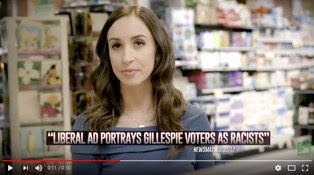 Reporter: This new attack ad from a Democratic group.

Tucker Carlson: Single most disgusting, unfair thing I have ever seen.

Brian Kilmeade: Calling people who don’t agree with you white supremacists is totally out of bounds.

Mike Huckabee: This ad presumes Virginia voters are really stupid and that they would be suckered in by something this despicable.

Ed Gillespie: Ralph Northam doesn’t just disagree with millions of Virginians who don’t share his liberal policy agenda, he disdains us. It’s an attack on all Virginians. I’m Ed Gillespie, candidate for governor and I sponsored this ad.