Obamacare Is Still a Disaster for Virginians

Lost in the hysterics of the Left (including Lieutenant Governor Ralph Northam and Congressman Tom Perriello) is the fact that Obamacare simply isn’t working for Virginians and that Congress’ actions to repeal and replace this disastrous policy is just the first step in a long process. Our premiums are skyrocketing, our choices in doctors are vanishing, and our economy remains stuck in neutral.

“Despite significantly reducing our exchange footprint, our individual commercial products could potentially lose more than $200 million in 2017,” said Aetna spokesman T.J. Crawford in an email.

“Based on that financial risk, and growing uncertainty in the marketplace, we will not offer on- or off-exchange individual plans in Virginia for 2018.”

This means big problems for Virginians who relied on Aetna’s individual plans:

Aetna sells health plans in 50 of Virginia’s 95 counties, according to data from the Robert Wood Johnson Foundation. In 24 counties where it operates, there is just one other insurer selling Obamacare plans: Anthem, under the brand name HealthKeepers.

Anthem has already filed paperwork related to potentially selling plans in 2018 in Virginia.

However, Anthem and other insurers have warned that if they are not guaranteed federal subsidies for reducing out-of-pocket health costs for low-income customers, they may have to either raise rates for 2018 plans, or not sell them altogether.

Adding insult to injury, Anthem is following through on its threat and is increasing its premiums here in Virginia by an average of 37.7 percent for next year.

But Governor Terry McAuliffe, who has been a loyal cheerleader for Obamacare, says “we’re fine in Virginia.” He’s wrong.

Sadly, as Ed Gillespie warned when Obamacare was being rushed through Congress, it has not been the improvement Democrats promised it would be and now they are nowhere to be found to help fix it. 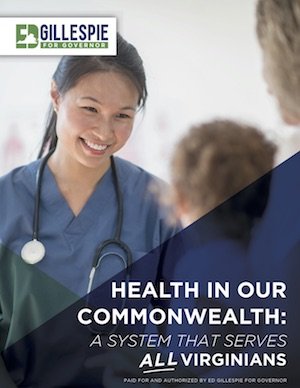 What They Are Saying: “Ed Gillespie put forward a thoughtful, innovative healthcare proposal that will benefit all Virginians” Obamacare Is Still a Disaster for Virginians